Check us out on Yelp and Google

May 2017 Named as “One of the 12 Excellent Things to Eat, Drink, and Do in New York City This May” by Grub Street

“Another option for eating outside this month: Bowery Market has added Smorgasburg veterans Parantha Alley to its lineup. The vendor specializes in eponymous Indian flatbread — which it offers stuffed with fillings like spicy ground chicken, potato, and green peas — and specials like spicy plantain and coconut, and bacon, egg, and cheese.”

“Paranthas at Parantha Alley, Smorgasburg, Williamsburg and Brooklyn Bridge Park
Stopover at this Smorgasburg roti stand for a classic Indian street treat that’ll run you just $7. Seared to order on a hot griddle, these flavorful flatbreads come stuffed with your choice of potatoes, cheese, super spicy shredded fish (machili), chicken, or cauliflower (a great new choice this spring), and a handful of sauces — cilantro chutney, fried chiles, pickled mango — so intense they demand to be taken seriously, then cooled off with a hearty ladle of cucumber yogurt, provided for that exact purpose. Brooklyn bonus: many are vegan and — new this season — available gluten free.”

Come join us for discounted plates every night after 10PM until January 20, 2021 or Day of Impeachment!!!

IN SOHO ON CHARLTON STREET B/N HUDSON AND VARICK

Come on out to support and eat from up-and-coming restauranteurs and local entrepreneurs like us. Its going to be a perfect sunny and 83 degree day– finally!  We’ll be there 10AM-6PM… Be there before we sell out 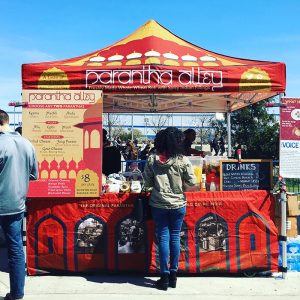 WE’VE BEEN INVITED TO FRIDAY PICNICS IN BRYANT PARK WITH THE HESTER STREET MARKET THROUGHOUT THE 2017 SUMMER SEASON.  STARTS THIS FRIDAY MAY 12, 2017 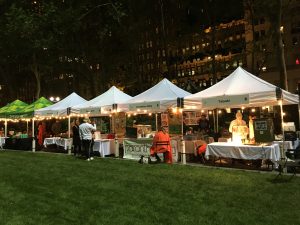 Every Friday on the lawn, Bryant Park has a free picnic, featuring over 100 free blankets to borrow, lawn games, entertainment, and food vendors from the Hester Street Fair. Each week, Bryant Park Presents will bring to the picnic a theater, music, or dance production.

Artist and friend Colleen Kong Savage has finished a beautiful mural on our new brick and mortar street side location on the corner of the Bowery and Great Jones Street.  We are now open 7 days a week and open late!  Still only $8 for 2 paranthas we will be featuring our full menu plus 2 new brunch options and hot or iced ginger masala chai.  Delivery will be up and running by the end of May 2017.

THAT WAS THEN, THIS IS NOW. 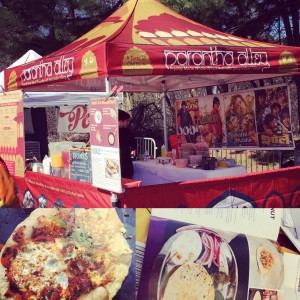 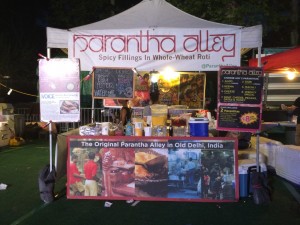 WE MADE IT INTO THE TOP 150 AUTHENTIC AND SPECIALTY RESTAURANTS IN NYC! 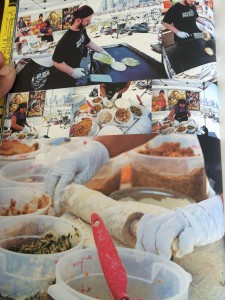 Restaurant guides exist in different shapes and sizes, but this is the first guide that focuses on the “must eat” of a restaurant. Luc Hoornaert, a long-time professional in top products and a genuine foodie may not be a New Yorker, but he certainly knows the best places in NYC where you can get a taste of the wide world that will even amaze culinary big shots.  From inconspicuous food carts with the best snacks to restaurants where reserving a table is a major hurdle.

WE CHANGED OUR LOOK FOR THE 2015 SEASON!

Come check us out at Smorgasburg throughout the season! 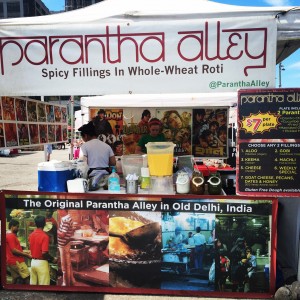 Come out to eat Paranthas this Sunday October 5, 2014 from 11am-5pm  in the Lower East Side on Hester and Essex Streets!!

CHECK US OUT IN FOOD TRUCK ROAD TRIP: A COOKBOOK

Part cookbook, part photography book, and part history book, FOOD TRUCK ROAD TRIP—A COOKBOOK has it all. The chapters cover all the food truck favorites, from soup and sandwiches, to American comfort food, to Latin American, Asian and fusion foods from all corners of the Earth—plus drinks, sides, desserts, and snacks. And every recipe is accompanied by gorgeous photographs taken by the authors, both trained photographers, as well as the history of the food truck, its owner, and the story behind the spectacular food.

September 2014 Review By Preethi Mahadeviah of The Skinny On Manhattan:

“The aroma of chillies and fish frying pretty much compelled me toward this stall. Parantha Alley specializes in stuffed paranthas (also spelled and pronounced as parathas and parottas depending on which part of India whoever is making it is from). 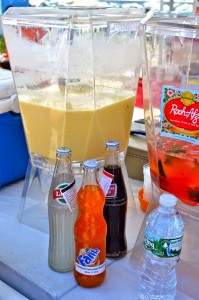 This is essentially two layers of whole wheat Indian bread with a thin layer of either meat, vegetable, fish or cheese. And it’s amazing how many Indian restaurants in NYC ab

We decided to try the Machli (stuffed with spiced fish) and the Kheema (stuffed with spiced chicken). solutely suck at this. Not Parantha Alley, though. This is the real deal. One bite and we were in paratha heaven. The parathas were moist without being soggy and nicely balanced, as they were doughy and firm without being overcooked.  They were served with cilantro chutney, cucumber raita and hot pickled mangoes. Yum. I’m keeping my fingers crossed that this husband and wife team will open a restaurant so these parathas don’t have to be just a weekend thing.”

DID YOU SEE US IN HARLEM?

Come check us out Uptown in Harlem for the Harlem Food Festival on October 27, 2013!  Our special parantha will be a spicy pumpkin just in time for Halloween!!  Best costume gets a free plate on us… 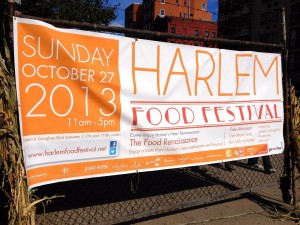 By Ina from Big Apple Curry:
“Next  on our list was Parantha Alley, which showcases hot-off-the-grill paranthas to order. Parantha is an Indian concoction that my mother makes, so how could we not try it? Uncooked whole wheat roti dough is rolled out into a circle and then a small amount of stuffing, savory or sweet, is placed in the middle; then the sides of the dough are pulled up around the filling and the whole thing is rolled out flat again, then cooked on a grill. It really is a treat, and Parantha Alley offered interesting combinations of fillings, including their award-winning goat cheese, honey, and pecan parantha, which I must say, was fantastic. Hot off the pan, the coarse whole wheat roti, hot and buttery, was a lovely foil to the melting goat cheese, oozing honey, and nutty pecans inside. I love trying new flavor combinations that really surprise me, and this did not disappoint.”
WHAT? WHO US???
YES, WE ARE 2012 VENDY AWARDS FINALIST 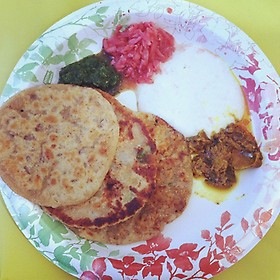 As many of you may already know: Parantha Alley was chosen as a finalist in the 2012 Vendy Cup!! This is the first year that the Vendys has included the Market Vendor category and we are both honored and in awe of our selection into this esteemed group.

Excitingly, 4 out of the 5 vendors chosen were from the Smorgasburg family!

Here’s what some have been saying about our Vendy sampler plate:

By Sandra Moy of  Veritasty: 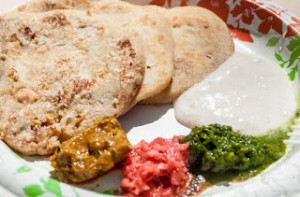 Photo by Alex Jagendorf of Veritasty

“From Chinese, we again visited some Indian cuisine with Parantha Alley. My first encounter with parantha was in London’s Brick Lane when a big group of us visited for lunch. Our parantha was a big doughy griddle-fried bread that was flaky and greasy.  The paranthas at Parantha Alley were quite different: smaller, filled with different stuffings, and topped with an assortment of Indian chutneys.  They gave us a chicken parantha, potato and pea parantha, and a goat cheese, date, pecan, and honey parantha, which is extremely non-traditional, but was fairly mindblowing because I could actually taste all the ingredients.  I especially loved the yogurt sauce and the cilantro mint chutney.  Yum!”

By the Planet Chocko Zine 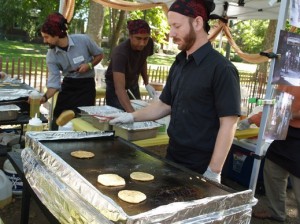 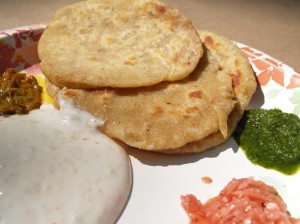 “My favorites out of the bunch included Parantha Alley, Cinnamon Snail, Phil’s Steaks, Okadaman, Uncle Gussy’s, and Imperial Woodpecker SnoBalls! Every vendor brought a slice of the tasty, though! Congratulations to all of the Vendy Award participants as well as to all of the 20,000+ street vendors of NYC!”